My goal is to connect and revive modern, interior architectural Interiors, which are to us strange and but familiar archetypes.

Cave art is believed to be the oldest evidence to represent people and animals. Its expression strength and constancy are admired and traced in present times. The rock pictures of the Sahara desert, for example, which were discovered in the 19th century and are currently being examined, show a variety of representations of both people and animals, these preserved their fascinating radiation until today. The entire Mediterranean region contains an abundance of treasures in this regard, drawn and painted on both rock faces and cave walls.

After thirty years of different artistic alignments, I came up with the idea to assimilate prehistoric and historic frescos into contemporary painting.

You see pictures and paintings that are inspired of subjects, that go back to the beginning of mankind history. The picture titles only partially speak to the origin, but the art works are almost independent and only the desire to create them comes from history. 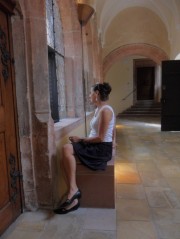